One of the things that people with SIBO often miss is the taste of pizza. Gluten-free pizza crusts won’t work, since they contain things like rice flour, potato starch, xanthan gum, and yeast; a cauliflower pizza crust won’t work either, since cauliflower is in the higher “orange” column of Dr. Siebecker’s SIBO-Specific Diet Food Guide chart.

The idea for my pizza recipe began when I saw several bloggers using zucchini for their crust base, and since zucchini is (within reasonable limits) still in the safe “green” column of that Food Guide chart, I decided to give it a whirl.

Surprisingly, zucchini made a passable “crust” (when prepared properly), and when topped like a pizza, it even looks and tastes reasonably close. 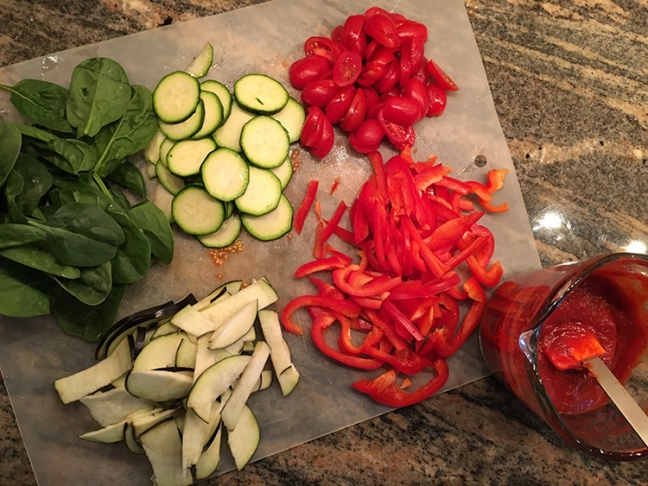 “Topped like a pizza” being the important words… in the time it took to drain, make, and pre-bake those crusts, we got so hungry, we ended up piling on a lot of toppings, and then… well… it looked a lot more like a frittata than a pizza. 🙂

I must have really strong hands. After squeezing out the moisture from my grated and drained zucchini, I did not end up with enough “crust” for two people as the other recipes indicated. The following is a tried and tested ratio that lets YOU decide how many pizza “crusts” you want to create. For ONE 8-10″ pizza crust:

Grate zucchini, place in a mesh colander, sprinkle with a bit of kosher salt and a few squeezes of lemon juice, toss well, and let the zucchini sit for 10 minutes to drain (top photo).

Using your hands or a piece of cheesecloth, squeeze as much moisture out of the drained zucchini as possible… the more dry it is, the better your crust will crisp up (middle photo).

Line a cookie sheet with a Silpat (I forgot this step, and clean-up took quite a bit more time).

Pat zucchini mixture into a thin round (roughly 1/3 to 1/2 inch thick) and bake until golden brown, about 10 minutes.

As the zucchini crust is baking, stir together the tomato sauce ingredients:

*These ratios depend on how thick you like your sauce. Start with one TBL of paste + 1/3 cup of sauce. Mix and taste. Add more of whatever you prefer.

Once your pizza crusts are pre-baked, top them with sauce, add your choice of toppings, and return to the oven for final baking… roughly 8-10 minutes, depending on how wild (and thick) you got with your toppings (ours took closer to 12 minutes as you can well imagine).

P.S. I don’t try to be a great photographer. This is just what food looks like when it’s prepared by a really busy person on a really busy work day. 🙂 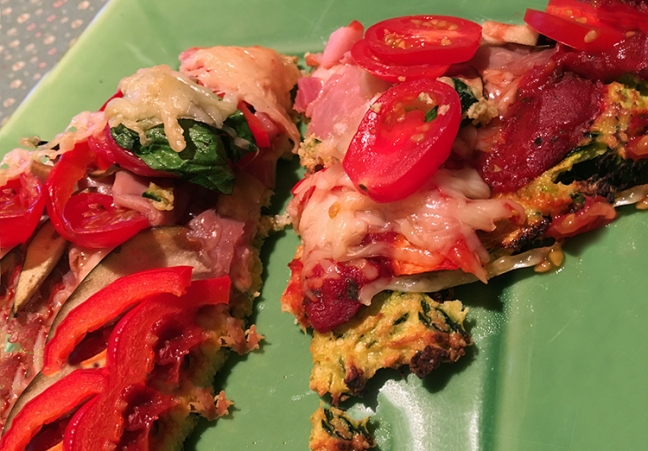