SIBO (Small Intestine Bacterial Overgrowth) occurs when there is an increased number or change in the bacteria located in the small intestine. Certain foods (and/or your body’s inability to break down these foods) will “feed” this bacteria, causing a “bloom” that results in bloating, burping, gas, cramps, and other symptoms.

This does not mean bacteria is bad—your entire gastrointestinal tract contains bacteria to break down and digest food. The location, amount, and type of bacteria varies from your stomach, to your small (upper) intestine, to your large (lower) intestine (colon). When the small intestine has a healthy and normal range of bacteria, it’s able to push food in a wavelike movement through the digestive process.

SIBO (usually pronounced “see-bo”) is a condition in which abnormally large amounts of bacteria (that are more commonly found in the lower intestine) have begun to multiply in vast numbers in the small (upper) intestine.  Whether it’s the type of bacteria, and/or the volume of bacteria, the levels are no longer in balance, which disrupts the digestive process, and exacerbates bacteria build up.

Is SIBO the problem, or is it the result of an underlying problem? Doctors generally agree that there are many different risk factors (causes), but only two underlying causes: 1) structural abnormality of the small intestine, and/or 2) deficiency of the Migrating Motor Complex (i.e., your body is unable to achieve an adequate “wavelike muscle movement” that pushes food through your digestive system. Dr. Allison Siebecker, ND, MSOM, LAc explains both risk factors and underlying causes in the below video:

SIBO is typically diagnosed via a hydrogen and methane breath test, where the patient’s baseline hydrogen and methane levels are tested, after which they consume a sugary substance, then have their levels tested again to measure the levels of hydrogen and/or methane present in their breath. (Bacterial fermentation of malabsorbed sugar produces hydrogen and methane gas, which is absorbed into the bloodstream, and carried up through the lungs.) Some professionals may also recommend an endoscopy.

Some medical professionals recommend antibiotics (e.g., xifaxan / rifaximin, commonly prescribed for Irritable Bowel Syndrome / IBS) to bring down the bacterial load in the small intestine as a first step, combined with strict changes in diet (the “green column” in the SIBO-Specific Diet Food Guide).

Other professionals prefer to avoid antibiotics (given the increase in antibiotic resistant bacteria) and treat SIBO primarily through a change in diet, sometimes with specific herbal supplements, in order to yield what they believe is a more natural, longer-lasting result.

The above chart is a snapshot of an informal poll taken on the Facebook group “SIBO Discussion and Support.”

Allison Siebecker, ND, MSOM, LAc (United States) tailors her SIBO dietary approach around a comprehensive reference chart of specific food ingredients, organized in four columns: Green = Safest | Yellow = Restricted | Orange = Problematic | and Red = Avoid. This is the approach that worked very well for us, along with digestive enzymes and a motility supplement; it continues to be our go-to resource. View her protocol here >

Meanwhile Nirala Jacobi, BHSc, ND (Australia) tailors her SIBO dietary approach with a 3 month ‘Bi-Phasic’ Plan. Her ingredient list resembles much of Dr. Siebecker’s (although there are some notable differences), along with an illustrated explanation of SIBO, a self-treatment outline, and some good recipes. View her protocol here >

Treatment may also include…

Every doctor has a similar but slightly different approach. Every human body is a “different sack of chemicals.” Consult a medical professional to determine which approach is best for your body! 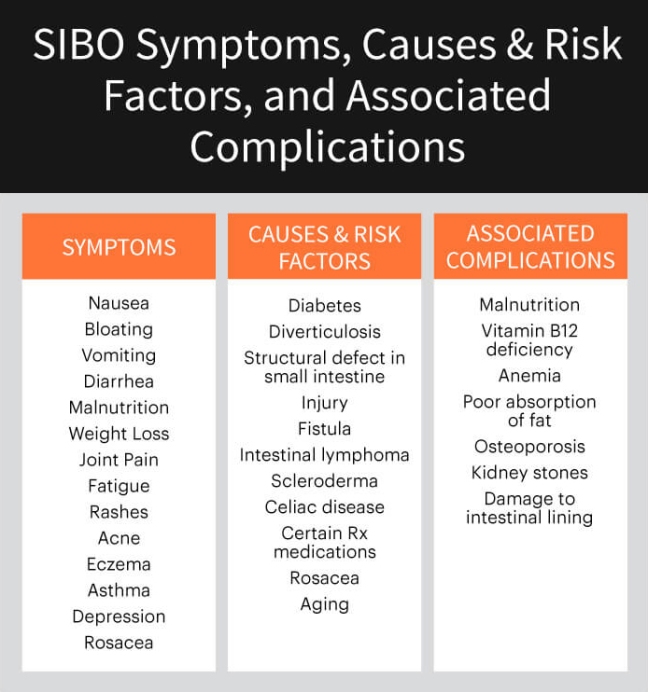